With today’s modern audio equipment many times you have choices of which technology to use to transport music from one piece of music equipment to another ( e.g. analog, coax, optical and USB).  The obvious question to ask is “Is there a difference between them?” and if the answer is yes then “What is the best one to use?”.  Well the simple answer is that each of the technologies are good.  However, a few of the technologies have some advantages over the others. 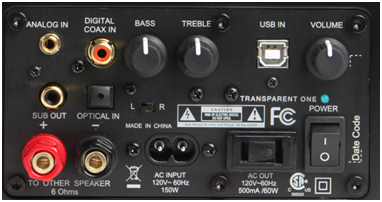 Transparent One Back Panel

Analog – The analog output is probably the most common output on music sources today.  Every mobile phone, mp3 player or computer has an analog output.  This output is usually connected to a set of headphones or ear buds in the case of the mobile phone and mp3 player.  In the case of the computer, this output is generally connected to a set of powered computer speakers.  The output connector is usually either a 3.5mm stereo jack or a pair of RCA type connectors.

The analog signal is a varying voltage which is changed both in level and frequency to replicate the music.  It looks something like this on an oscilloscope.

If noise is induced on the analog signal it manifests itself as a “pop” or “static” sound in the speakers.

Coax – The digital coax output is probably the least used output on music sources today.  It can be found on some computers and other dedicated music sources like the Sonos Connect wireless receiver.  The output is usually connected to an amplifier, an external Digital to Analog Converter (DAC), or to a powered speaker like the T1 that has a built in DAC.  The output connector is a single RCA connector which usually has an orange colored center insulator.

The digital coax signal is a series of “1s” and “0s” (or high and low voltages) output in what is called a bi-phase format.  Both stereo channels are encoded in this digital bit stream along with sync bits which allow the receiving device to synchronize with the signal.  This combination of biphase data packaged with the defined channel encoding is called S/PDIF which stands for Sony/Phillips Digital Interface.  The signal will look something like the bottom signal in the picture below.

Since the biphase format is a self-clocking signal (meaning no separate clock signal is needed) only one signal conductor and one ground are needed to make the connection.  The other advantage to a self-clocking signal is that it can run at virtually any sample rate/bit rate up to the cable’s frequency limit.  Any noise induced on the signal lines will usually cause a loss of sync which results in a short music dropout.

Optical – The optical output is a very commonly used output on many music sources.  Again, it can be found on most PCs and almost all Apple computers and laptops where it shares the connection with the 3.5mm analog connection.  The output connector is either a TosLink or mini-TosLink connector. 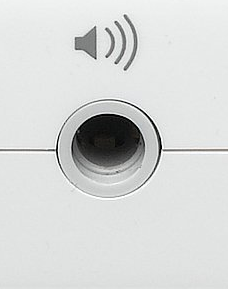 Just like the coax interface, the optical interface uses the S/PDIF format with the major difference that the signal is comprised of light (light on/light off) instead of voltage levels.  Other than that it is identical to the coax interface.

USB – The audio USB output is available on virtually every computer.  However it is very seldom used on any other non-computer-based music sources.  The output connector is usually a type A USB connector with the input on the peripheral (the speaker in our case) is a type B USB connector (really original names hugh?). 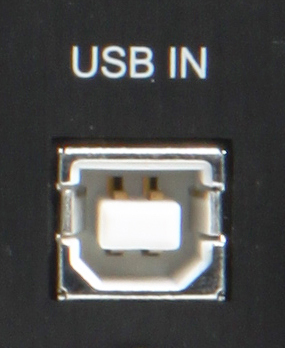 A USB interface can connect to any number of peripheral devices.  Each device type has its own protocol for bidirectional communication with the computer.  The audio USB configuration is one of those device types.  I won’t go into the details of the audio USB protocol in this blog, but suffice it to say that while the data sent from the computer to the audio USB speaker is indeed digital, it is not S/PDIF.  The sample rates supported over USB is dependent on the capabilities of the USB processor used in the destination device (or speaker in the case of Vanatoo).  Unlike the S/PDIF interface, these resolutions are quantized and fixed to a specific group of common resolutions (i.e. sample rates and bit depths).  In the end the USB interface is just a defined means to transfer a digital audio file to the destination device in a time dependent manner.  In fact, that is true for all three of the digital interfaces; the sole purpose of the interface is to transfer the digital audio file from the source to the speakers in a streaming fashion, nothing more, nothing less.

And The Preferred One Is…

Of the three digital inputs there is virtually no difference in the sound quality between them.  Still, again all things being equal, we do give a small preference to the optical over the other two.  The preference comes from the fact that the optical “light pipe” is totally immune to any electromagnetic noise you may have in your home, like wash machines changing cycles or air conditioners starting up.  The transient electromagnetic noise generated by the home appliances can sometimes cause interference in the signal on the coax or USB cables which result in a short loss of sync with the source and thus a short music dropout (usually less than one second).  Proper shielding and cable/speaker placement can go a long way to reduce the possibility of this happening but using the optical interface will eliminate it entirely.

So in summary the take away should be to not stress over which interface is absolutely the best.  Each one will give you many hours of enjoyable listening on your Vanatoo speakers.  However if your music source provides you multiple choices then maybe this blog can help you decide which you will use.

1-855-771-1161
[email protected]
We use cookies to ensure that we give you the best experience on our website. If you continue to use this site we will assume that you are happy with it. Privacy policyOk