There has been a rather contentious debate within the audio community for years between the subjectivists, who like to listen, and the objectivists, who like to measure.  The argument goes that the  pure music listeners hear what they hope to hear, whether it’s real or not, and that the scientists apparently can’t hear at all, and don’t know good sound from bad.  I personally believe that there are some kernels of truth on both sides, with enough BS swirling around to drown all concerned!  I also know that science has been behind all of the major advances in audio, and that critical listening has been the key to refining those advances.

How does Vanatoo go about designing for good sound?  The good news is that the company founders are both engineers and both music enthusiasts.  So we understand the science down to its fine details, and we are every bit as detailed in paying attention to the resulting sound.  There is no argument between the objective and subjective reality of what we do; both must pass muster before a product is considered fully baked.

Our technical development process is the classic “three-legged stool”, which we all know as inherently stable.  The process starts out in a linear fashion, doing A, then B, then C.  But a little ways into the process the different elements are all in play at once, being done to investigate observations and to prove to ourselves that we really understand what we are doing.  The elements are: 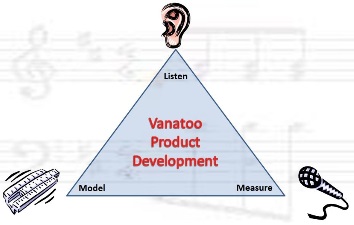 Modeling – This is the hard science behind the design.  We create mathematical models of the design to predict how it will behave.  These models include FEA (Finite Element Analysis) of the magnetic systems, a Vanatoo derived customized model of the driver/box/crossover combination, acoustic models of how the sound interacts with the outside of the box and the room, and nonlinear models of what happens when you drive the speaker hard for maximum output.  These models combine to set the baseline for what we expect from the design.  How low the bass will go, how loud you can play, how much amplifier power is required, how room placement will affect the sound, what kinds of distortion will creep-in as you increase the volume, etc.

Measurement – This is the objective means of knowing that the design is behaving the way the model said it would.  There is no such thing as “It works in theory but not in practice”.  That’s a popular saying, but a scientific cop-out.  If the measurement does not match the model, and the measurement is made carefully, then the model is wrong and you don’t understand what you are doing.  And yes this happens, even to me!  But long before any Vanatoo product reaches production the measurements and models will agree with one another, and we’ll have reason to at least think we know what we are doing!

Listening – The Holy Grail of subjectivism!  This is the most important part of the process, the hardest part of the process, and the most time consuming.  The theory (model) and practice (measurement) can match perfectly, and you can still have subpar sound.  There have been huge advances in our understanding of how to produce good sound over the past 20 years, but the reality is that the science is still somewhat incomplete.  So a design can ”Sound good in theory but not in practice”, because it is true that nobody understands audio theory to the 100% level.  You have to listen.  You have to listen to a lot of different music.  You have to listen for a long time.  And you have to listen to other systems and to live music to calibrate your expectations and not sell your ears on the fact that you want your creation to sound good.

The above process went on for 18 months during the development of the Transparent One.  We went through around 15 iterations of the woofer design to get to the final version.  We had agreement between our models and measurements early on, and had a design that matched what we wanted on paper within the first 6 months.  Then came the careful listening.  Then came the “It’s not good enough – why?”, and the model refinements, the measurement refinements, then the next 10 samples, and many, many more hours of listening.

There is no shortcut to getting things right.  Understanding the science, having good tools and using them wisely, and paying attention to detail are all necessary ingredients to a successful audio product.  But you also must keep your eyes (and ears) on the prize, know what you are trying to achieve, and not stop until you are just a little better than you had hoped.

That’s how Vanatoo goes about designing for good sound.  In the next installment in this series I’ll talk a little about what the current state of the art in science tell us should sound good.

1-855-771-1161
[email protected]
We use cookies to ensure that we give you the best experience on our website. If you continue to use this site we will assume that you are happy with it. Privacy policyOk